And so the story continues and the cry of the Israelite people rises to God and He hears their cry.  They're done with their Egyptian gods.  They don't want any part of the empire's false story and promises of that which it cannot deliver.  They've lost their wealth, their luxury, their comfort, and their security.  The mask has been ripped off and they see things for what they truly are, which is what God had told them from the very beginning.

They're ready to trust the story again.

And so the stage is set for deliverance.  We're ready to see what God will do to deal with the plot of the Israelites.  And we're introduced to Moses.

The beginning of Moses' life is covered with a relatively short passage of biblical text: the story of his birth and escape from death.  In a world where Pharaoh is killing all the male babies and throwing them in the Nile, Moses' mother saves him by placing him in a homemade ark and sending him on his way.  In an ironic twist, he is picked up and adopted by the very family seeking to have his life.

It's worth noting (in a world that seems to deny women a role in the story) that Moses isn't just saved by his mother.  He's saved by an entire group of tenacious women who refuse to give up on God's story.  In the Text, the Egyptian midwives report that the Hebrew mothers are so tough and determined that they are giving birth before the midwives arrive.   Whether that story is true to detail or whether there are groups of Egyptian midwives who have a conscience (or maybe both), we have a story of groups of women that change the course of history by faith, chutzpah, and obedience.

This part of the story is important, as this will happen again and again and again throughout the biblical narrative.  As much as our patriarchal hierarchies have tried to snuff out the role of women in the redemptive work of God, God's story will continue to insist that they have consistently propelled us forward into a better tomorrow.  The story of the Exodus, especially (and the midrash surrounding it), will bring this to light repeatedly.

So Moses is saved and is raised in Pharaoh's household.  He ages and one day is out among the work of the Israelite slaves.  When Moses sees the injustice of an Egyptian slavedriver beating a Hebrew, Moses responds in a rage, beating the Egyptian to death and hiding him in the sand.  When Moses learns that he wasn't able to bury the news of the incident as easily as he did the body, he flees to the deserts of Midian.  On the run, he again encounters injustice.  This time at the hands of some male shepherds who are harassing the female shepherds of Jethro.  After chasing off the male shepherds, Moses is befriended by Jethro's family and finds a role tending a flock of Jethro's sheep.

It is here that Moses will have his famous encounter with God in the burning bush.

So God calls Moses.  But the events of Moses' life are important.  Just as we did with Abram, we ask ourselves why God is choosing Moses.  Some may answer that Moses is overly qualified for the job, having been raised in Egypt and the recipient of untold training and numerous relationship opportunities.  But it's interesting that God never speaks of these things at all.  In fact, when Moses persists in arguing that he is the wrong man for the job, God never brings up Moses' impressive pedigree.  Not once.

I'd like to suggest that God chose Moses for a different reason.  And it's a reason that we've encountered before.

God was looking for partners.  And Moses is a man who has some “God qualities.”

God will tell Moses that his job will be to go and be “as God to Pharaoh”.  God is looking for a partner that won't just go and give Pharaoh a message — but someone who will go and BE the message to Pharaoh (to borrow a phrase from Ray Vander Laan).  We mentioned that God is a God who always hears the cries of the oppressed.  Well, in the course of a couple pages, Moses has shown us that he has a heart that hears the cries of the oppressed, as well.  He's not about to let a brutal slavedriver beat a Hebrew or watch as some female shepherds get abused.

Moses hears the cry.  Now, he probably needs to do some work on HOW he responds to the cry; it seems to be a little impulsive, violent, and built on unmanaged anger.  And so God leads Moses to the desert for forty years and lets him lead sheep.  This is important because shepherding involves the ability to lead with your voice.  A shepherd never leads through the power of his stick or physical force.  No matter how many western American pastors teach that the shepherd uses his staff to poke and prod and steer and whack sheep, no matter how many times a Sunday school teacher tells the moving story of how a shepherd breaks the leg of a sheep to make it dependent on the shepherd, it just isn't true.

Any Middle Eastern shepherd (and that is important: we're not talking about American sheep that graze in pastures of alfalfa; we're talking about the biblical world of sheep and shepherds) will tell you — and usually demonstrate — how a shepherd leads with his (or her — shepherds are usually young girls) voice.  The sheep have been trained to know their shepherd's voice and commands (ringing any bells?  “My sheep know my voice…”) and they follow it to a fault.  Just within the last few years, a story hit the Palestinian news about how a shepherd was trying to call his sheep to him from across a ravine and the entire flock followed his voice and walked off the cliff to their death.

God wants to teach Moses how to lead.  You lead with your voice, not your stick.  (More on this later.)

This is important, because God sets Moses up for a battle of sticks.  When Moses protests that he needs some help to accomplish, what does God do?  He tells him to throw down his stick.  When Moses is at the Red Sea, what will he be told to raise over the water?  His stick.  In Exodus 17, what will he strike the mountain of God with to make water flow?  His stick.  And what will he raise into the sky over the battle with the Amalekites?  “The rod of God.”

This showdown is going to be about sticks.

When Moses goes to confront Pharaoh, the Text will tell us that Moses and Aaron throw down the staff and it becomes a snake (actually, in the Hebrew, it becomes a crocodile).  The magicians of Pharaoh manage to do the same thing to their two sticks.  Then what happens?

But that's not what the Text says.

The Hebrew very clearly says that Moses' stick eats the other sticks. 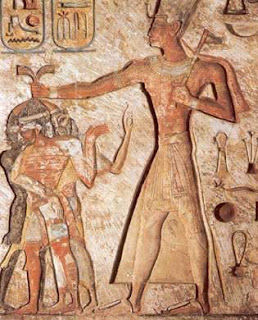 Pharaoh's stick is the embodiment of empire.

Moses' stick is a representation of God's word: the Great Shepherd and His voice.  God's power lies in love and mercy and compassion and justice.  God's stick is the instrument of shalom.

This will be the heart of the body of God's narrative.  The story of the Scripture is what I call “The Tale of Two Kingdoms: Empire v. Shalom,” and it begins in the Exodus with a battle of sticks.  Which is true power?  Which carries true authority?  Which stick leads people to true freedom?

There is a message here about what true power looks like.  There's an invitation to hear the story that God is telling with His voice.  There's a compelling challenge to issue to our hearts about what impresses us and drives us and attracts us.  There's a message about the seduction of empire and the allure of driving people into submission like Pharaoh.  There's a stark reality for leaders everywhere to have to wrestle with what true leadership looks like.

The invitation to lead with your voice.  To tell a story so compelling that others will follow it to the green pastures of the Shepherd.  God leads Moses into the desert for forty years to teach him how to lead with his voice.  Forty years.  Some of us will need similar deserts in order to be prepared to lead God's sheep as hired hands.  Some of us will have to be convinced that it's better to lead by pointing the rod of God towards the heavens than it is to beat our subjects into submission.  Some of us will have to learn that sometimes the stick of Pharaoh is used in the name of theology and efficiency and ‘church discipline’.  And perhaps some of us will have some repentance to work through, because we've spent our lives and ministries burying bodies in the sand.

I know I've had to.  And I know we'll be talking more about this later because of it.

But if we're willing to follow the voice of the Shepherd, we'll find that we are still being invited to trust the story.
Posted by marty.solomon at 12:43 PM