Mark’s gospel ends up being significantly different than Matthew’s. The main difference between the two will be Mark’s audience. Whereas Matthew was a Jew writing to Jews, Mark will be a Jew who pens a gospel to the Roman culture. This will shape the message and agenda more than anything else.

The first thing that a reader notices about Mark is the pace. Mark is much shorter and carries a much faster pace through the gospel. Romans are westerners who like to be entertained. They are not easterners who value a treasure hunt buried in the Text or an expectation that you would want to work through tough questions in order to unearth amazing truths. Romans want you to get to the point and tickle their fancy. And so Mark writes a gospel that is a fast-paced tale of all the things Jesus did. He bounces from story to story, keeping the characters moving and Jesus busy.

Mark also plays on the value system of the Roman culture. The Greco-Roman culture was built on four pillars of Hellenistic life: education, health care, entertainment, and competition. If you pay attention to the stories Mark chooses to tell and the way he chooses to tell them, you begin to notice that Jesus is being portrayed as quite the impressive character. He's a master teacher (education), an incredible healer of all kinds of conditions (health care), an entertainer of crowds who are constantly “amazed” (entertainment), and better than any other man being offered for consideration (competition).

I think there is a reason that many of us prefer the gospel of Mark. In short, we are Romans! We are westerners who are cut from the same cloth. It’s for the very same reasons we enjoy the shorter, faster, more entertaining gospel of Mark. But Mark has an agenda much deeper than simply entertaining his readers. And he starts to head down his main path as the gospel nears the end.

One of the many differences that you can find in the gospel of Mark appears to come during the telling of the crucifixion story. An astute Bible student may notice that in the gospel of Mark, Jesus is offered wine mixed with myrrh before He is on the cross; in every other gospel, He is offered vinegar mixed with gall, both before and on the cross. This seems like a minor detail (or a major one for biblical critics), but in fact, Mark is doing something much deeper under the surface. In order to explain this, I would like to describe the coronation of a Roman Caesar. (While I heard this teaching from Ray Vander Laan, the man who did the definitive work on this was the Oxford scholar Thomas E. Schmidt.)

We don’t have a comprehensive account of every coronation of a Caesar, but we do have a few. One of the best records we have is of the coronation of Emperor Nero. From the records that we do have, one could conclude that the typical coronation had nine steps:

1. The Praetorian Guard gathers to hail Caesar as lord and god.
2. Royal robes, a wreath crown, and a scepter are placed on Caesar.
3. They lead Caesar through a procession, lined with incense altars.
4. Caesar is followed by the sacrifice (a bull, in Nero’s case), and he carries the instrument of death.
5. They arrive at Capitoline Hill; Caesar is offered wine mixed with myrrh, but he refuses it, pouring it out.
6. The bull is killed; Caesar pronounced death or life on a host of prisoners, demonstrating that he has the power of life and death.
7. The emperor ascends the steps of the temple with the High Priest on his right and his commander on his left.
8. Caesar is acclaimed “lord and god” as people sing his praises.
9. They wait for a sign from the heavens (in Nero’s coronation, according to history, there was an eclipse).

If one takes this list and reads through Mark’s account of the crucifixion, they are stunned to find what Mark is doing. Take the list above, open your Bible to Mark 15, and connect them to the following passages: 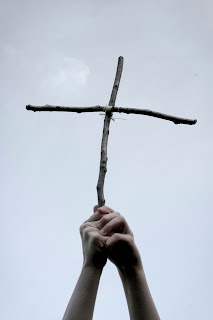 Mark tells the crucifixion as if it was Jesus’s coronation. Mark’s trying to make the case that Jesus’s crucifixion was not a moment of defeat — it was His greatest moment of triumph.

This is a stunning agenda to attempt to communicate to a bunch of Romans. Mark is essentially trying to tell them that the world they live in is completely backwards and upside down. He’s saying that the way of empire doesn’t actually bring true peace. That in weakness — in the laying down of His life — Jesus showed empire to be the farce that it is.

And then, there is the ending. If you look in your Bible, you will notice a note that says that Mark 16:9–20 is not in the earliest manuscripts. To be quite frank, I do not believe that Mark 16:9–20 should be in our inspired Text. I believe that the early Christians attempted to “clean up” the ending to Mark’s gospel and fix something that was never broken.

If you read Mark 16:8, you can see why they would think such things. Would Mark really end his gospel with women running away, trembling and afraid?

Of course he would.

Because any Roman who reads Mark’s gospel — and accepts it — is going to feel just like those women. If they affirm the truth that Jesus is a better king, their Roman life as they know it is over. They have much to fear. And so, much like the story of the prodigal son, Mark leaves the ending open-ended and unwritten, inviting the Roman readers to consider what they believe to be the truest true about the world and what brings real peace. This is our great challenge as “Roman” readers. Do we really want to choose the “triumph” of Jesus? It runs counter to everything that our worldview says is power. Yet Mark confronts our worldview and invites us to consider — as we possibly sit trembling and afraid of the implications — whether or not we’d like to believe this “gospel” of a better kingdom.
Posted by marty.solomon at 11:39 AM