If we needed any evidence that Abram wasn't the happiest camper after letting Lot go for the second time as he trusted God's story, we need to look no further than the very next story (Genesis 15).

We can almost sense God's joy as he reacts to Abram's faith, trust, and obedience.  The story begins with God approaching Abram, celebrating his victories.
"Do not be afraid, Abram.  I am your shield, your very great reward."

Can you sense God's excitement?  I can see God fist pumping the area, saying, "YES!  That's what I'm talking about!  Way to go!"  And knowing that Abram has to be confused and afraid, God says, "Don't be afraid!  I am your great reward!"

But Abram is in no mood for religious talk.  (Ever been there?)

In the Hebrew, you can sense the frustration of Abram in his response:
"O Sovereign LORD, what can you give me since I remain childless and the one who will inherit my estate is Eliezer of Damascus?"

Abram says, "Are you kidding me?!  I just gave up everything!  You are my reward?  How can you possibly reward me?  I have no future.  And not only that, but what I do have is going to go to my stinking servant, since I will not have any descendants!"

Abram can't see what God is up to.  We rarely can.  Our perspective is so limited and so finite.  Our perspective calls us to question our hope and it challenges our perseverance.  Abram is frustrated — understandably so.  How could he possibly see any way out of this situation that will lead to God fulfilling His promises?  I can resonate with Abram in this story.  Even when God blesses me with the strength to live by faith and trust His story, I still find that I can be so frustrated by what I can see and how hard it is to trust.

And apparently, God isn't too interested in providing answers at first.  If you notice the next verse, it starts with "And Abram said…"  In the Hebrew, if there are two adjacent statements made by the same person and they both begin with "____________ said…", then it is assumed that there are two different conversations taking place.  If it were one conversation, the second "And Abram said…" would be unnecessary.  Therefore, if Abram asked the original question in verse two, he apparently got no response from God.

And so he asks his question again; this time, more pointed and with a little more 'umph'.
"You have given me no children; so a servant in my household will be my heir."

Abram cuts right to the point.  He has a question and he wants an answer.

And so God (in my opinion, hesitantly) shares His plan with Abram.  He tells Abram that his descendants will come from his own loins.  And so, Abram trusts God (Wait, what!?  That's no small matter, but we won't deal with that here; it was worth mentioning) and then God widens the promise some more to include the land as well.  At this point, Abram starts looking for some collateral to hold on God's promise.  And God tells him to go and get a heifer, a goat, a ram, a pigeon, and a dove.

So Abram gets the animals and cuts them in half and arranges them opposite of each other.

Does that seem odd to you?
God didn't tell him to do that.

Abram knows exactly what to do because this is a common practice in the world of covenants.  They are setting up what is called a bloodpath covenant.  This is a covenant sign that is often used in Abram's day to signify a betrothal (engagement) covenant.  Those very animals are used, cut in half, and arranged opposite one another on opposing slopes.  Here is a picture of what the covenant looks like: 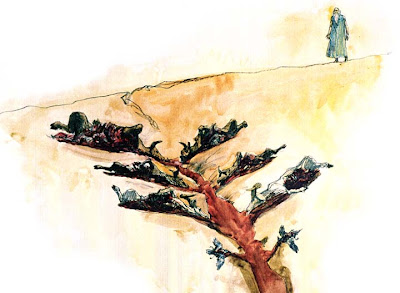 The arranged halves create a path of blood in between the animals.  I will use the example of a betrothal to explain the ceremony.  As the two parties agree to the marriage, the lesser party (in the example, this would be the future groom; he is asking the father of the future bride to marry his daughter) dons a white robe and then passes through the path of blood.  As the blood splashes up on his white robe, the symbolic statement is, "If I mistreat or abuse your daughter, you may do this in my blood".  After this, the father dons a white robe and passes through the blood path, saying, "If I do not supply you with a virgin for a daughter, you may do this in my blood".

It's the collateral covenant that allows for the parties to be held liable for their promises.

God sets up an engagement covenant for Abram.
Now, whose move is it?  Who is the lesser party?  Abram is, obviously.

But Abram doesn't pass through the halves.  In fact, he chases away the vultures.  What does that tell you?  This ceremony has been set up for some time.

But Abram knows that he'll never be able to keep his end of the covenant.  He won't be able to live obediently for God for the rest of his days.

And so God puts him in a deep sleep (the same sleep He put Adam in, by the way) and, while Abram is greatly distressed and troubled, Abram sees a flaming torch and smoking pot pass between the halves.  Now, fire and smoke always symbolize the presence of God (think the pillar of fire/smoke).  So what does Abram see?

God is passing through the covenant halves — twice.
God passes through the halves on behalf of Abram.

In other words, "Abram, when you fall short, I will cover your shortfall.  We will pay for it in my blood."

Goosebumps yet?
That's incredible.  And every Christian immediately sees Jesus in this story.

His message has always been the same:  "I am God.  I love you.  I am for you.  I will fight for you in spite of yourself."

* While some of this material has come from the teaching of Rabbi David Fohrman (particularly paragraph 8), a bulk of this material has come from the teachings of Ray VanderLaan.  The picture used in this blog post was acquired through the site linked within the post and high-resolution versions can be purchased from there as well.  Another fantastic treatment of ancient covenants can be found in Sandra Richter's book "Epic of Eden" (InterVarsity, 2008).
Posted by marty.solomon at 9:21 AM